What if the dwarf Key Deer of Florida’s Keys grew longer legs? Would it then survive as a species? Probably not, because developers want the deer’s habitat for building houses for people who will, in the end, be under water as the ocean rises due to warming of the polar ice caps.

The photo is of a needle-felted art piece that stands 6 feet tall that was recently on exhibit at the Palo Alto Art Center. Artists have taken up the torch for climate just as the official policy is lagging. Good for Bay Area artist Karrie Hovey, who now has shifted her sights to the African Rhino, which is far from the ocean, but not far enough from poachers and reckless hunters.

PAAC had this to say about Karrie’s Key Deer:

“San Francisco artist, Karrie Hovey, has imagined Key Deer as they would need to evolve in order to survive in the rising waters that will submerge their reserve in the Keys if global warming is not reversed— their legs would need to lengthen by a factor of 3, making them stand over 6 feet tall. How improbable is that?”
— PAAC Exhibition Notes

Here is a gallery of images of the tall, long-legged Key Deer in exhibition poses: 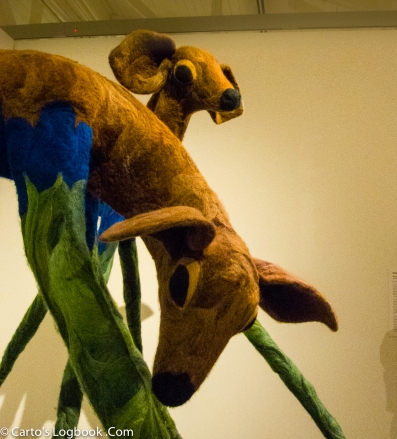 Bloggers throughout the world are pondering Delta in this week’s WordPress Photo Challenge.