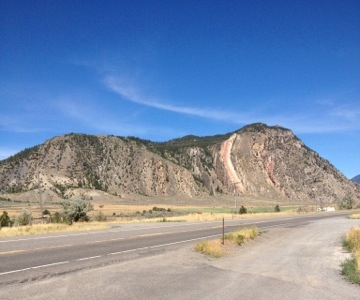 If you are driving from Gardiner to Livingston, a mountain with a red slash from top to bottom will appear to your left.

The mountain is called the Devil’s Slide. It shows the unique geology of the North edge of Yellowstone Park — weathered limestone ridges thrusting up through the earth surface at odd angles.

This rest stop South of Gardiner has green lawns and great views of the Absaroka (ab-soar-key) – Beartooth Wilderness, which was created by President Jimmy Carter in 1964. Hooray for him, an under appreciated president.

These primitive areas were once part of the Crow Indian Reservation, but gold was discovered and non-Indians rushed in. When the gold was gone, the government declared the lands “primitive” –no more development. The Crow’s call themselves the Absaroka.

The yellow Yellowstone Park buses can still be seen in Livingston. This one was parked at the NP Depot. This bus is a White Motors Model 706. It carried 14 passengers. White made 500 of these small busses in the 30’s.