Looking through the Art Gallery door, I saw myself reflected as a burnished shadow in the aluminum sides of a large box, which turned out to be one of the art works in the current show — Hi5: First-Year MFA Exhibition.

Dominating the center of the gallery, Cy Keener’s A Letter from the Sky is a project that interprets the story of rain by converting rainfall into electronic signals that are played back through strips of light emitting diodes inside a darkened aluminum box. The lights weren’t quite working when I visited, but it’s a great idea for a project.

Ashley Valmere Fischer’s series of photographs portray the rhythm of human life against the backdrop of vegetation, mountains, and rivers. The large photos, 42 x 52 inches, are heavily worked and then printed by InkJet on Canon Infinity paper. 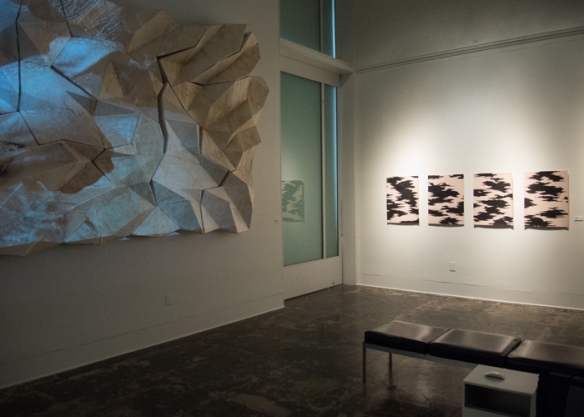 Four silkscreens by Masako Miyazaki (in the spot light)

The silkscreens of Ms. Miyazaki can be looked at like the stills of an animation. She has three series on display.

Justin Wood’s large, 18 feet by 8.5 feet, sculpted plastic and paper form covers the back wall of the gallery. On the form is displayed a photograph of a live model posed as the painting The Dead Pearl Diver, 1858.

The projection is visible as one walks around the gallery. The caption has a quote from a Canadian comic,

“All matter is merely energy condensed to a
slow vibration — we are all one consciousness
experiencing itself subjectively […] we’re the
imagination of ourselves.” —Bill Hicks

The show was curated by Professor Xiaoze Xie, who is a well-known painter. He said:

“Hi5 brings together an extraordinary group of young and ambitious artists who employ a variety of media to explore existential, social, environmental, psychological and aesthetic issues, as well as the relationship between the physical and the virtual. What distinguishes the show is the prominent role computer technology plays in these innovative projects.”

The 2015 class enrolled in September and this is their first show. That’s a tough schedule to follow, but they have made a great start towards their degree in Art Practice.

Carto
To see other responses to the Serenity Challenge visit
WordPress Dailypost/Serenity.