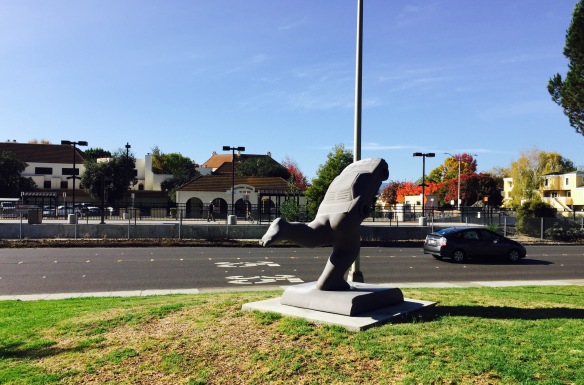 The photo above was shot looking West toward the Caltrain station and North California Ave. The intersection of California and Alma was closed 40 or so years ago. The good reasons for the closure I have forgotten, but the unintended consequence was that the town was divided into two parts: North of Alma and South. City planners often make mistakes like that.

Fortunately, there is now a tunnel under Alma and the RR tracks so that bikes and walkers can get to the businesses on North California. The tunnel is very busy on Sunday when a farmer’s market comes to the North California Ave.

The sculpture Rrrun by Marta Thoma is more controversial than either the street or the tunnel. Some people are turned off by the bare butt, others by the morph of car and human, and others just don’t like public art. Include me among those that like the sculpture and public art.

Note: The Voyage of the Pequod, my old blog title, has sailed into history: I hope the new blog title better represents the blog content. I edited the About page and uploaded a new blog picture/icon… Details, details.